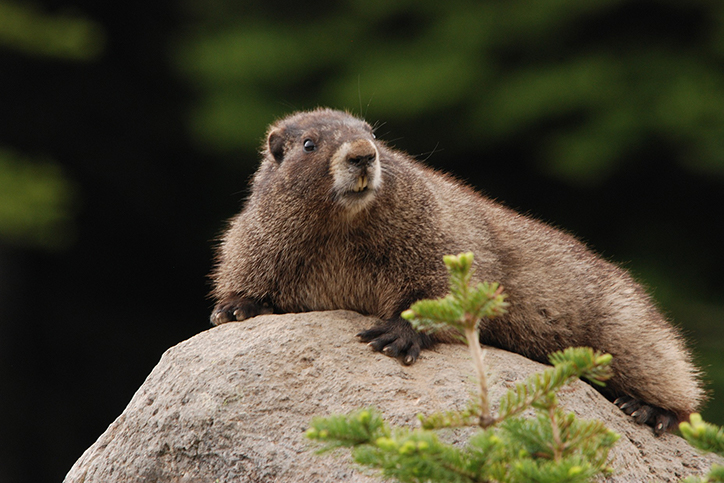 Did you know that Whistler was named after this little creature?

If you take one of our Peak 2 Peak Combo Tours during the summer months then you may spot a hoary marmot - the vocal ground squirrel that our town owes its name to. Up until the summer of 1965, Whistler Mountain was known as London Mountain because of the heavy fog that some of us locals are all too familiar with. When London's fog turned into a dangerous and deadly smog it became a negative association so the town was ready for a change.

The hoary marmot lives in the alpine and makes a very distinct whistling sound, which is why they are nicknamed the "whistler." The name stuck and so Whistler Mountain and the beginning of the resort era began. Hoary marmots are the largest of all the ground squirrels and hibernate during the cooler months from September until May. The silver-gray fur on their shoulders and upper back is the reason that they are called "hoary" marmots.

These ground squirrels can be found at alpine elevations typically above 2,500 metres (8,200 ft), sometimes lower nearer the coast, but always above the tree line. They make their homes in rocky terrain or alpine meadows, sedges, and grasses which along with flowers and other herbs is their primary food source. If they aren't careful then they can become easy prey for eagles, bears, coyotes, cougars, and other larger predators that also roam the alpine.

One thing that's interesting about hoary marmots is that they live in colonies of up to 36 furry individuals with a single dominant male as their sole leader. They are very social mammals who have been observed play fighting, wrestling, touching noses, and even grooming each other. While they are friendly towards other colony members, hoary marmots from the outside would be seen as a threat and chased away by the female adults.

Aside from eating and socializing, hoary marmots also love to spend time in the sunshine. It's estimated that they spend up to 44% of their time during summer spread out on the rocks under the sun. We can't say we blame them... it looks like a very nice life! If you spot a hoary marmot out and about, please be respectful, keep your distance, and never feed or allow off-leash pets to chase them.

Keep your eyes peeled next time you're on a summer tour with us and maybe you'll see a hoary marmot!