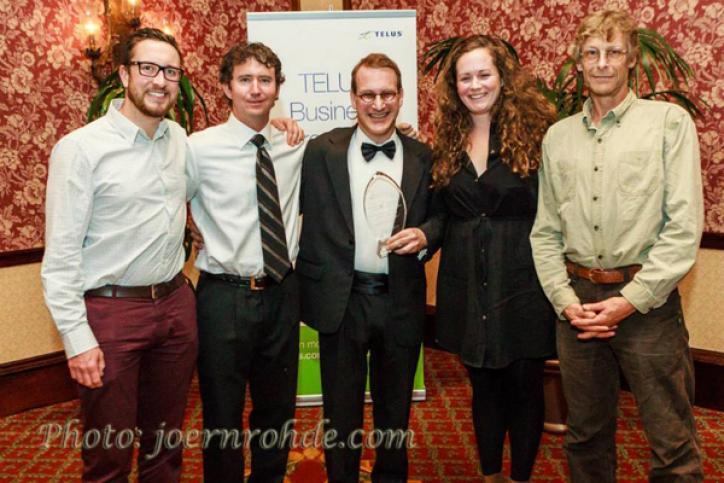 On June 19, 2015 at the Whistler Excellence Awards, Ziptrek Ecotours were the honoured recipients of the Sustainability in Action Award. Co-founder and President, Charles Steele accepted the award on stage and shared with the crowd how Ziptrek Ecotours came to be -

"Thank you very much. It is an honour to receive this award and much credit for it must go to the work of other people in our community. While Ziptrek strives to be excellent in everything we do, including operating sustainably, the real contribution we make is in teaching others about not only the things that Ziptrek does but the things that our community has accomplished together. It is the Whistler story that really reaches people and it is those who created that story without my help that deserve the real credit.

Ziptrek was the first zipline company in North America, but really what we wanted to do was get people out into nature so they’d be more interested in learning about it.

But we didn’t know how to teach people about sustainability. Initial attempts were clumsy. Bears live here. Bears are important. So take care of the forest. It just wasn’t right. I went to the municipal website to see if I could learn more about the animals and plants in Whistler and there on the home page was a button that said “Whistler – It’s our Nature”. I thought, “what a clever pun” and I wonder what that’s about and a brief video animation began.

It showed the earth from space and said “The earth is a closed system with a finite amount of resources. There is a thin layer of life on the surface.”

I thought, “Wow” That is awesome. That pretty well sums it all up.

I went to the Municipal hall the next day, and said I am sorry to bother you but there is this Whistler – It’s our Nature thing on the website and I was wondering if I could speak with somebody about it.

The receptionist told me to go downstairs to the basement, go to the far back corner of the planning department. There in a dark cramped room I found two vivacious young women, Shannon Gordon and Esther Speck – the municipal Sustainability Department!

They told me that the video explained the 4 Conditions of a Swedish Sustainability Framework called the Natural Step and that Whistler was the first municipality in Canada whose government had officially adopted the Natural Step to guide it’s decision making. Wow! How cool it that? I thought again.

And without that, without the community having decided that sustainability was important, having the video on the website and Esther and Shannon in the basement – I likely wouldn’t be standing here today.

It is funny what can come from such a small start and to see what it can lead to.

Yesterday I welcomed the latest team of Ziptrek staff. I told our new guides that I recently had dinner with a frequent visitor to our town, who is only a frequent visitor because of Whistler’s sustainability credentials. His name is Dr. Goran Carstedt. He is the former CEO of Volvo, President of Ikea, and Sr Dir of the Clinton Climate Initiative. He is now the Chairman of the Natural Step globally.

Despite our work teaching, I told him I remain deeply worried about the direction the environment is heading.

Dr. Carstedt told me what gives him hope.

He said that the industrial revolution did not happen through the will of a government or because of a large international agreement to industrialize. It happened because millions of individuals, made millions of small decisions that over the past 150 years have led us to where we are today.

He told me that his hope is that in the same fashion, it will be millions of individual people like us making millions of independent decisions which will transform the world again.

So when I welcomed our new staff last night at our summer kick-off party I reminded them that over the next 10 weeks each of them will teach up to 1500 people. I stressed to them that this is very possibly the biggest opportunity they will ever have in their lives to make a difference for the planet. I urged them to seize the opportunity to be the spark of change that inspires those 1500 people

Because it’s amazing how far things can go from one spark.

That small two person municipal sustainability department – evolved into the Whistler Centre of Sustainability which has helped almost 30 other communities on their paths toward a more sustainable future. Shannon just came back from Faro, population of 300, 4 hours out of Whitehorse because they want to learn from what we’ve learned in Whistler.

Esther is a spark that landed further from Whistler when she left to head up all of the sustainability responsibilities at Mountain Equipment Co-op. When I beseeched her to stay in Whistler, she said, “Charles – 10% of Canadians are members of MEC. This is a huge opportunity to reach 10% of Canada directly with some of the things we’ve learned here in Whistler”.

And Esther still brings new ideas back into Whistler through her ongoing involvement via the Whistler Centre, along with all of the other great minds like Cheeying Ho that the Centre has drawn to Whistler to all of our benefit.

And Ziptrek itself also has spread. If we were to transport ourselves right now to the other side of the planet, we would find ourselves in the thick of winter in Queenstown, New Zealand – with Ziptrek Guides high up in the trees teaching people there about the Natural Step, spreading Whistler’s guiding philosophy even further afield.

Mark Gandy and Jay Conroy over there have just come back from Mont Tremblant where they are building Ziptrek Tremblant at our sister resort in La Belle Provence where they will also soon be learning all about the Natural Step, but this time en Francais.

None of this would have been possible without my father Bob Steele, who is our brilliant structural engineer, the indomitable Mark Gandy who risks life and limb to build everything, or any of the other people at Ziptrek. Or my wife, Kaori, of course.

We also couldn’t have done this without people like Bob Dufour, Arthur Dejong, Doug Forseth, and Dave Brownlie at Whistler Blackcomb who had the vision to let us do this when no one had ever done it before.

And finally, we certainly couldn’t have done it without the entire community of Whistler and it’s successive governments making the bold choices that gave us the powerful success stories we tell and which inspire people and other communities around the world.

As I look around the room tonight I feel confident that our community has the leadership within it to ensure that we will  continue to be an inspiration to others for decades to come.

Thank you for this honour and the opportunity to speak with you this evening.