The Sasquatch: Myth and Legend 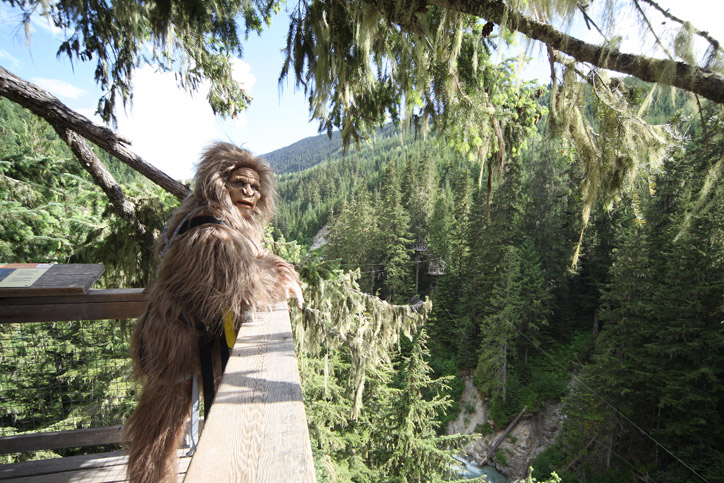 When deciding to build the largest zipline in Canada and the USA we knew the name needed to be as legendary as the experience. Many ideas were tossed around by the team but we kept gravitating back towards one, The Sasquatch®. What better encapsulates the lore, excitement and west coast culture?

The Sasquatch is a tale as old as time with sighting stories dating back throughout the ages. Believers hold a carved stone foot made sometime between 1 500 BC and 500 AD as the oldest known local depiction. Discovered in what is now the Lillooet region, it is thought to be fashioned after a Sasquatch footprint because of the size and shape.

Approximately 1/3 of Sasquatch sightings occur in the Pacific Northwest making BC a hotbed of activity. Many of these sightings are chalked up to hoax or misidentified bears- a bear walking around on it's hind legs looks alarmingly human like. But there are common occurrences in the stories that can't seem to be explained away, such as sightings in areas bears have no reason to travel through or the accompanying smell that is nothing like a bear or human at all. The fact that a lot of these stories containing similarities come from a time before the Internet has got to at least leave you wondering...

One of the most recent and famous sightings was recorded in the Tantalus range in 2014; this video has reached over 2 million views:

Next time you're driving the Sea to Sky Highway you may want to bring your binoculars!

While we can't promise you will see an actual Sasquatch on your visit to BC we can promise you a thrilling adventure of a lifetime that will leave you questioning, "did that really just happen?!"

This zipline is a reclusive as it's namesake in the winter so if you dare to ride The Sasquatch® book before the summer season ends!