Creature Feature: Things that go Bump in the Night

Ghosts and ghouls be warned, the coastal temperate rainforest has her own formidable creatures that roam the night!

Did you know bats are on every continent except Antarctica? Their world domination alone is enough to fear them! No to mention their soundless flight, fangs and superior navigation. We kid, they are fascinating creatures. Bats are not only nocturnal they are also active at dawn, making them crepuscular. They orient themselves in the dark using echolocation comprised of brief ultrasonic sounds. The clicks and chirps they make that we can hear are for social interaction. In BC we have 16 species,  the most common being Little Brown Myotis and Yuma Myotis. The truly terrifying fact? Four of the species in BC are classified Endangered, Threatened or of Special Concern, mostly due to habitat loss. Bats control the insect population, less bats = more insects. *shudder*

If you’ve been following along with our Creature Features then you’ll remember our post about the Northern Spotted Owl. One thing we didn’t mention in that post? They eat other owls. Yep, they're nocturnal cannibals. Oh, and what do they do if they’ve caught a surplus of prey? Store them in a cache prison of fallen logs or rocks. Check out this post to read some nicer facts about them.

Ever get that feeling you’re being watched? Well, if you’re in the coastal temperate rainforest, it could be a large and elusive wild cat. Cougars have extremely good vision and are adept at stalking, they’ve been recorded travelling up to 50km a day. Although the males can reach up to 125 lbs, cougars are more closely related to your pet cat than other big cats such as lions. That these solitary creatures not only hunt at night but also during the day and can take down a moose (almost 15x their weight) has all contributed to our fear of them. Luckily, we are usually of little interest to them. If you do run into a cougar, it is best to make yourself as big as you can and slowly back away (more info here). Of all the cats out there though, I do suspect it's little Tigger at home that's most likely plotting your demise.

Are you a night owl? If so, our Twilight Tours are perfect for you! Zipline in the dark with a headlamp and stars to guide you. 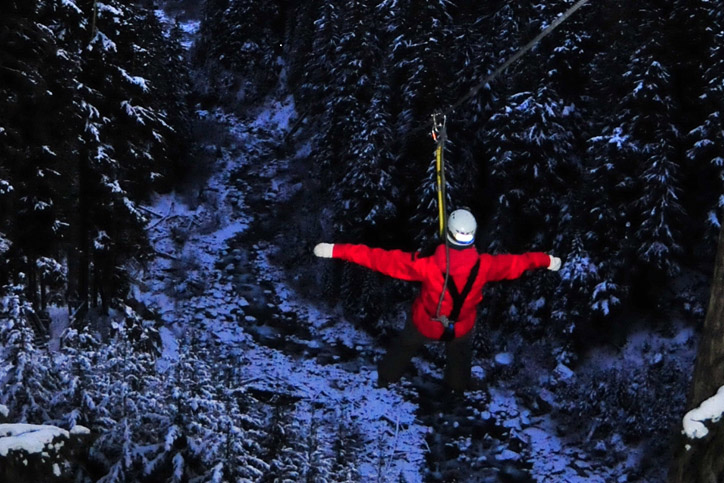