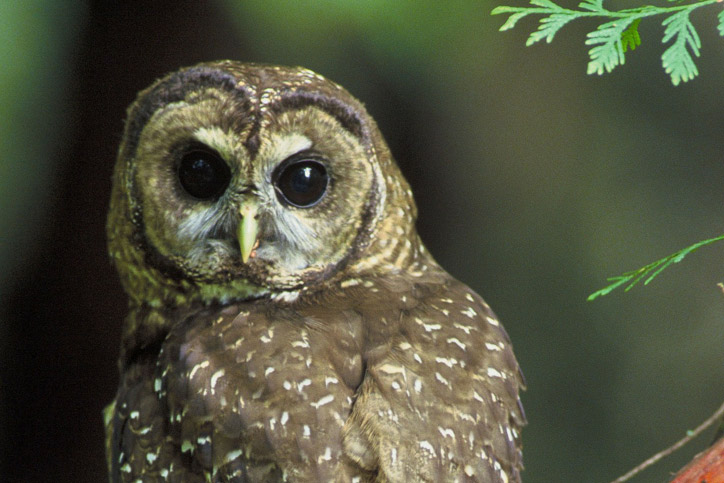 As you can imagine, operating in one of the last stands of old-growth forest in the Whistler Valley means we encounter and (respectfully) operate side-by-side some incredible wildlife. In this feature we'd like to introduce you to the northern spotted owl.

This owl loves to live in old-growth forest with high tree canopies so it can fly between and underneath the trees. Standing snags (trees with snapped-off tops) make perfect nesting sights for this bird as do big trees with large holes. Northern spotted owls live in pairs, with only 100 pairs thought to be left in BC you can count yourself very lucky if you see one.

You'll know it's a northern spotted owl by it's medium size, dark brown colour with round white spots and facial discs with dark borders. You may also identify it by it's territorial call "whoop wu-hu-hoo" or by it's recognizable flight pattern of fast paced wingbeats between stretches of gliding.

In the last decade the province has protected over 182,000 hectares of their habitat in an effort to preserve and encourage growth in the population. Outside of BC they can also be found down the west coast in Washington, Oregon and northern California.

Nocturnal hunters, they feed mostly on small rodents but can also prey on birds, reptiles and invertebrates. Their lifespan is approximately 10 years long and they reproduce in the late winter/early spring. The female northern spotted owl lays 2-3 eggs per clutch. A week or so after hatching the male owl takes over feeding duties and hunts for the hatchlings. The young owlets will grow in their flying feathers over their first month.

Like lichen, the northern spotted owl is an indicator species meaning their presence implies a healthy ecosystem.

Don't forget to look up the next time you're on tour!